There’s a multitude of things that players can do in Assassin’s Creed Valhalla. Fans of this latest installment in Ubisoft’s long-running franchise have been slowly discovering the hidden secrets and Easter eggs discreetly hidden throughout the game’s world. This time around, fans have discovered one forceful way to unlock a new lethal weapon, and that’s by hitting a bunch of rocks.

Bugs and glitches are always expected of any massive game such as Assassin’s Creed Valhalla. Developer and publisher Ubisoft has done a great job so far in containing these technical issues, and there are only a few that players can truly call game-breaking. Although, there was one instance where a glitch allowed players to obtain a lot of opals by “killing off” the training dummies.

That said, this latest discovery is somewhat similar to that glitch in a sense that the Isu bow is probably not meant to be obtained that way. YouTuber JorRaptor recently uploaded a video showcasing how other players can earn the “Noden’s Arc” hunter bow just by hitting rocks. 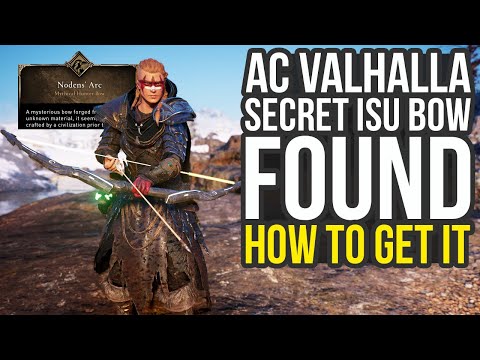 First and foremost, players need to go to Northumbria, which is located at the topmost part of the map, and then go to a particular lake. A small island should be visible from there. If players swim towards that island, they’ll find a pile of sparkling rocks.

Players then need to hit the rock a few times with whatever weapon they have equipped, as the choice of weapon doesn’t really matter in order to activate this. After doing so, players have to save and then reload the game at least three times—although they can reload it more than that for safety measures.

Voila! There’s a very high chance the following those particular steps caused Assassin’s Creed Valhalla to glitch out and add the Noden’s Arc into the player’s inventory. This Isu bow is undoubtedly an incredibly deadly weapon, and any player would want to bring it along with them.

After this glitch became popular enough to circulate throughout the community, Assassin Creed Valhalla’s narrative director, Darby McDevitt, posted on Twitter confirming that this wasn’t the “‘proper’ way” to to obtain Noden’s Arc. Although, he does admit that it’s a “clever brute force hack” that can be useful to speedrunners.

Of course, there’s a different way to obtain the Isu weapon, but McDevitt doesn’t further explain what the proper way is. It appears to be such a top secret item to unlock that apparently, no one has obtained it the proper way before. One reply on McDevitt’s tweet said that surely by now, someone must have already properly found it. However, the narrative director simply said that “someone almost has,” but didn’t provide any more information about it.

Dedicated Assassin’s Creed Valhalla fans will surely want to try and discover the proper way of obtaining Noden’s Arc. When that happens, it will probably be a cause for celebration, given how long this weapon and remained a secret. For now though, fans who just want to get their hands on the weapon as quickly as possible can simply follow the exploit.

How To Delete Hidden Cache On Your Android Phone