Black Ops Cold War Beta players who will achieve level 10 in the game will receive a free SMG Weapon Blueprint after the game is released in November.

The beta schedules are more complicated this time around and the event will be held on two separate weekends. From October 8 to October 9, the beta will be available exclusively for PlayStation 4 users who preordered the Black Ops Cold War digital edition on either the PlayStation 5 or PlayStation 4. 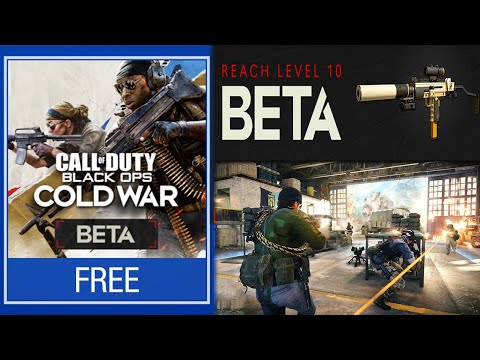 The following days, from October 10 to October 12, the beta will be opened to all PlayStation 4 users. On the next weekend, the process will be the same, beginning with exclusive access for those who preordered and then switching to an open format. That weekend though, the beta will be available to players on all platforms that Call of Duty Black Ops will be launching on.

All players who managed to reach level ten during the open beta on any platform will receive a reward upon the official release of Call of Duty Black Ops Cold War. In a post on the official website of Activision, all the information for the upcoming beta test was disclosed.

Call of Duty Modern Warfare introduced the blueprint and gunsmith feature for weapons and will be adapted into Black Ops Cold War. The gunsmith allows players to customize weapons with a wide array of various attachments which changes the gun’s stats all around.

Weapon blueprints are an additional feature of the gunsmith which changes the weapon’s design while also providing access to attachments that have not yet unlocked by the player. Aside from the blueprint that will be given out during the beta of Black Ops Cold War, a Russell Adler Operator skin will be given out for free for all Call of Duty Mobile players who plays the beta and successfully links their Activision accounts.