This year, three classic The Legend of Zelda games will be available on a unique Game & Watch system. In the early 1980s, Nintendo made its first entry into the gaming world with the first pocket-sized LCD (liquid crystal display) Game & Watch devices.

Each handheld had a digital clock as well as one game with two different play styles (typically portrayed as two different difficulty). For example, the original Game & Watch, Ball, was a juggling game in which the player had to maintain track of one ball in Game A and two additional balls in Game B.

Gunpei Yokoi, a game designer who collaborated with Shigeru Miyamoto on arcade hits Donkey Kong and Mario Bros, created the Game & Watch. Yokoi would go on to design the Game Boy, which was sold to millions of people all over the world.

As part of Mario’s 35th anniversary, an unique Super Mario Bros. Game & Watch system was introduced last year. Super Mario Bros. had an LCD display, a game, and a clock, just like the handhelds of the 1980s; however, the device had a color screen.

These Mario-themed Game & Watch systems were only available for a short period of time and were extremely tough to come by. Super Mario Bros. has sporadically appeared at retail price on some online storefronts since its release. 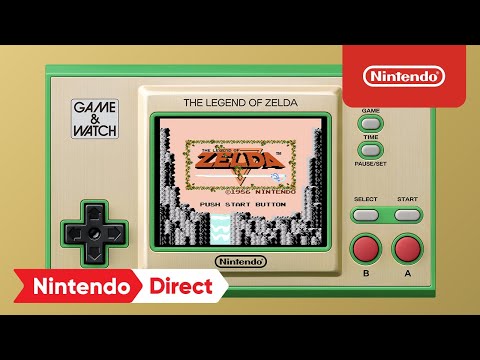 A reskinned version of Vermin, a 1980 Game & Watch title, is also included in the system, with Link as the main character. This portable will set you back $49.99 and comes with a black carrying bag.

The NES Zelda games and the watch, like the Super Mario Bros. 35th anniversary pocketable, will be offered in color. In addition, the original black and white versions of Link’s Awakening and Vermin will be shown. The clock in this Game & Watch will be interactive, with tiny stages from the first Zelda game played on the system’s “Watch” side.

Fans may expect difficulty obtaining a Game & Watch this autumn, similar to the Super Mario Bros. released last year. Fifty dollars for four older titles (two of which are already accessible in their original form and one which has been recreated for the Nintendo Switch) is a lot of money.

However, this is unlikely to have an impact on the product’s sales. Even though The Legend of Zelda producer Eiji Aonuma’s announcement that Nintendo has no other Zelda games in the works for its 35th anniversary besides expansions for last year’s Age of Calamity and the ongoing development of the Breath of the Wild sequel was disappointing, the release of the Game & Watch in November is a little treat to keep us busy between Skyward Sword in JAPAN and the release of Skyward Sword in JAPAN.

Kapp’n Is Making A Return In Animal Crossing New Horizons