A new Left 4 Dead 2 teaser trailer has just been released from its developers since The Last Stand, a community-made update is now nearing its unidentified but “coming soon” launch date. The last main official update for Left for Dead 2 was years ago and while the game has consistently received minimal care through minor updates to address glitches and bugs, fans of the series are still desperate for additional content, or if no updates are in the works, at least an assurance to Left 4 Dead 3.

Since Left 4 Dead 2 is a Valve game, fans have adjusted themselves to the truth that they may never get another installment of the game despite Left for Dead’s mind-boggling popularity. Thanks to its passionate fans, Left 4 Dead 2 is still alive and now the 2009 game is the first major official update in years.

#Left4Dead2 It's official only in the sense that Valve has signed off on it and is supporting its creation, however the actual new
Left 4 Dead 2:The Last Stand Update, is being built out by a community-made development team. pic.twitter.com/d7S3dt39QZ

The update is regarded as “official” since Valve signed off on the patch and has full support in its creation. However, it is worth noting that the Left 4 Dead The Last Stand update is being developed by a community-made team. Valve only agreed to fan-made updates and launches, similar to the Left 4 Dead 2: Cold Stream update that was released in 2012.

This new Left 3 Dead 2 patch has been receiving a lot of attention lately after its teaser trailer featured amazing aesthetics and polish. In the new YouTube video released by developer JAiZ, the future update unveils a familiar face in the likes of Bill Overbeck who is surrounded by zombie corpses along with his trademark cigarette still in his mouth and a bloody ax in his hand. The update has fascinated a lot of fans because of the trailer’s amazing presentation, though it is still unclear how the gameplay will feel and look. 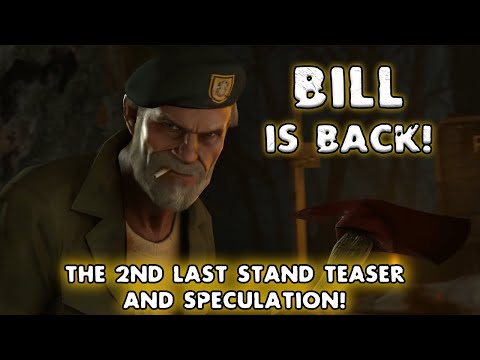 JAiZ also promised to integrate fan suggestions based on the comment section of the new Left 4 Dead teaser. In the update, JAiX announced that The Last Stand will feature a new campaign developed by a team that has previously worked on popular games like Dark Carnival: Remix.

If The Last Stand update brings more than this exciting new campaign, it could reinvigorate this forgotten classic game that most newcomers haven’t heard of yet. If this update will become successful, it could finally convince Valve to create Left 4 Dead 3.