The launch of A Realm Reborn back in 2013 made a significant impact on Final Fantasy 14, causing the MMORPG to undergo a rebirth. With this renewal, the online RPG was under the hands of producer Naoki Yoshida. Ever since then, Final Fantasy 14 experienced a revival in popularity on both consoles and PC that is still ongoing even today.

PlayStation 3 players were able to experience A Realm Reborn on the day of its initial release, and it was a significant moment in time because it was one of the very first major cross-platform releases way before crossplay became a prominent feature in gaming.

A Realm Reborn allowed both PC and PlayStation 3 users to play Final Fantasy 14 together, as well as give them the ability to transfer their data or progress from PC to console and the other way around. As the years fly by, Final Fantasy 14’s console version remains to be a reasonable choice for those console users who want to experience the expansive and highly successful MMORPG.

After months of waiting since its confirmation, patient PlayStation 5 users will soon be able to experience Final Fantasy 14 in an upcoming upgrade. After the Final Fantasy 14 Announcement Showcase that took place recently, Square Enix CEO Yosuke Matsuda announced something that would make console users quite happy.

A new trailer was then released, which showcased gameplay footage of Final Fantasy 14 taken from none other than the PlayStation 5. This upcoming upgrade and its many quality of life adjustments will finally address several concerns that many console users have had regarding the online game, including faster load times, 4K capability, as well as a high-resolution GUI.

Fans only have a few months left to wait before they can experience these changes, as the PS5 Open Beta for Final Fantasy 14 is set to launch on April 13, 2021. This announcement trailer in question was dropped after the Final Fantasy 14 Endwalker presentation, which took about 2 hours. ICYMI, Endwalker is the latest expansion for the MMORPG.

Yoshida also shared more details about the upcoming PS5 upgrade, including the fact that players who use this particular console will have two main modes to choose from. Namely, there’s the 4K resolution and the 2K resolution. The former will significantly improve the game’s quality, while the latter will allow the game to have a steady framerate. 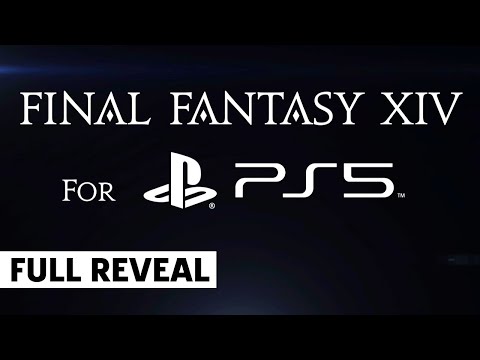 These options are somewhat comparable to the PlayStation 4 version of Final Fantasy 14, as it had a PS4 Pro option that allowed users to utilize benefits and enhanced capabilities that the base PS4 model didn’t have.

Previously, Square Enix revealed that it would stop support for the prior PlayStation 3 generation so that the team could focus on polishing and refining the current generation instead. As of right now, the studio hasn’t revealed what the future holds for Final Fantasy 14’s PS4 version. Perhaps, as time goes on, it will also see the same fate as the PS3 version.

That being said, those who have the PS4 version of the online game have the option to upgrade to the PS5 version for free. However, it’s worth noting that the player must have a copy of the game itself first, as well as an active online subscription.