Fortnite is well into Season 2 Chapter 5, and everything is going full speed ahead. This season, just like the one that came before it, is full of familiar faces that help the game embrace its current theme, “Zero Point.”

However, new content means new bugs and glitches as well, and it appears that Epic Games’ battle royale is being plagued by a new one that turns a player invisible during a match. Popular YouTuber Glitch King delves deep into this new exploit in a recent video, which allows players to remain invisible for an indefinite amount of time by using the cloaking device.

Fortnite recently released version 15.21, which introduced the latest crossover—this time around, it’s from the Predator series. During a match, players have the option to fight against the franchise’s signature alien in the form of a boss battle if they want to obtain his skin.

That said, there’s a brand-new item that comes with it: the Predator’s cloak device. In normal circumstances, this cloaking device is supposed to grant players powers of invisibility for only a limited time, allowing them the chance to ambush enemy players.

However, this device hasn’t been working the way Epic Games wanted it to, and has now become a cause for annoyance within the community. Even though the crossover only went live recently, players were already able to find a glitch that could be exploited.

Basically, thanks to the glitch, players can remain in a state of invisibility until the end of the match or until that player in particular logs out of the game. Now, as one can imagine, this exploit offers plenty of opportunities for abuse, especially since enemy players can only see the outline of the invisible player when at a distance.

To make things worse, Glitch King’s video gives interested players an idea on how to fully take advantage of the glitch. After activating the cloaking device, players simply need to disconnect their internet connection. However, it’s essential to reconnect it immediately. When these steps are done successfully, the game will leave the player’s character indefinitely invisible. 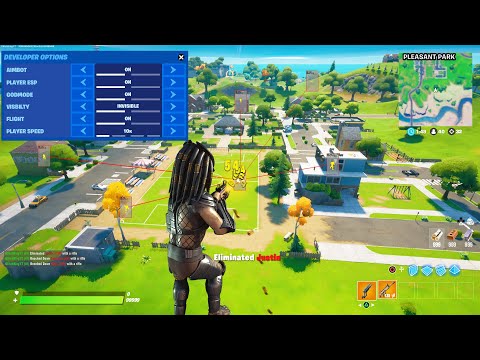 In other words, players are free to do whatever they want during the course of the match, with little to no chance that enemies will be able to fight back. Since activating the glitch is simple to do, as can be seen on Glitch King’s video, any Fortnite player can do this exploit at least until Epic Games fixes it.

It’s normal for games to have bugs and glitches, no matter the platform and genre. However, if an incredibly unfair glitch such as this one is found in competitive multiplayer games, this leads to frustration and annoyance more than anything.

Fortnite, especially, is no stranger to glitches and many are quite unhappy with this fact, especially since more keep popping up with every new addition. While it’s great that Epic Games wants to provide players with a fresh experience with every new chapter or season, it’s unfortunate that this new inclusion is leaving players upset.