Ever since its official release, Genshin Impact significantly rose above the charts in the East and West. As a matter of fact, the RPG title has been downloaded over 17 million times on mobile devices alone.

That being said, one thing you should know about Genshin Impact is that it’s a Gacha game. In case you don’t know what that is, it’s a type of game wherein you either have to grind hard just to get good resources or you have to fork over real-life currency for random but hopefully great rewards.

In this case, Genshin Impact players have to roll a die when they want to unlock a brand-new character, as they cross their fingers hoping to get the one they want. Because this mechanic is so random, it’s very rare for players to get good characters.

As such, this new leak about the title has been worrying fans. Not that far back, rumors about the release of Patch 1.1 have been circulating the internet. Understandably, players were hoping that the update would include new characters and a new region.

Now, it’s been confirmed that the update is on its way, and one of the beta testers revealed tidbits of information about what players can expect once it goes live. Unfortunately, there won’t be a new region, but that’s not the worst part of this leak.

Once Patch 1.1. is released, miHoYo will be nerfing three characters, namely Diluc, Venti, and Fischl. These three are some of the characters you are able to unlock in Genshin Impact, and it appears that they won’t be getting any additions either to try and balance out the nerf. 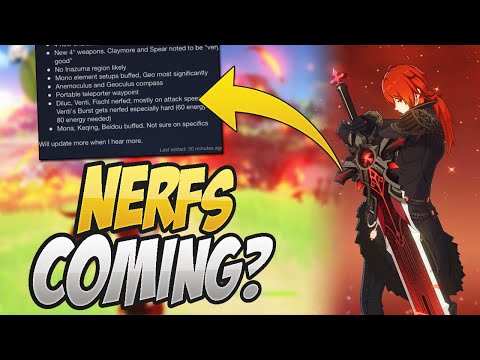 As of now, we still don’t know the specifics of these nerfs. According to what the beta tester said, the characters’ attack speed will be hit the most. Although, Venti has an additional nerf to which we know the specifics: it will cost 20 more energy if you want to use his Burst ability.

These changes are rather disheartening, as they’re still as difficult to unlock yet their characters will be devalued. This is especially disturbing to think about knowing that a streamer has already used up $2,000 just to get a five-star character.

Nerfs are understandable in PVP titles, as these are done in order to maintain balance in the PVP scene. However, as far as we can see right now, Genshin Impact is a PVE game, so balancing those three characters doesn’t make a lot of sense to many fans.

Fans speculate that miHoYo decided to nerf those characters in order to slow down gameplay. It makes sense, given the fact that decreasing the characters’ attack speed means monsters will take longer to slay. Consequently, progressing through the game will be slowed down too.

In one way or another, this is quite similar to when the loot drops for Marvel’s Avengers was nerfed, except, in this case, we doubt that the reward you get for all that grinding is even worth it.

For a highly-acclaimed title with the biggest global launch of any Chinese game in history, Genshin Impact is definitely doing something right to make it so popular right now. However, miHoYo should keep in mind that it’s a Gacha game that requires people to spend money, so it might be good for them to avoid unnecessary nerfs in the future.

All the New Content in ‘League of Legends’ 10.19 update