Just like in the first installment, Man of Medan, Little Hope included a secret teaser trailer of the next game in the series after the credits finishing rolling. Based on the teaser, we found out that the third installment is entitled House of Ashes and that it heavily features a squad of soldiers.

However, beyond the trailer and the fans’ speculations, there wasn’t a lot of information revealed about House of Ashes during that time. Fortunately, publisher Bandai Namco decided that it’s about time to reveal more details about the upcoming game, giving the fans an idea about what to expect in The Dark Pictures Anthology’s third installment.

Bandai Namco has officially released the teaser trailer that was secretly inserted at the end of Little Hope, along with the announcement that House of Ashes will be released some time in 2021. 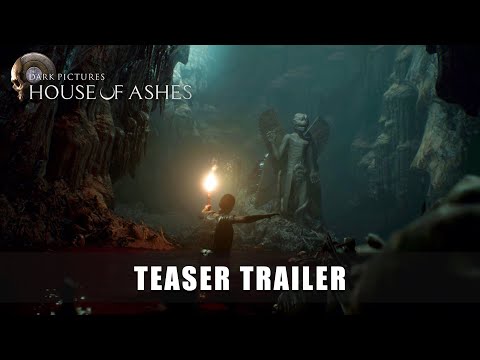 Not only that, but the publisher shared some of the game’s story details so that excited players can get the gist of the game. According to the announcement post on Bandai Namco’s website, House of Ashes takes place in 2003 during the Iraq War.

You will be following Rachel King, a CIA operative who is speculated to be played by Ashley Tisdale, one of the former High School Musical stars. Rachel partners up with an elite team of military soldiers in order to bust a secret chemical weapons facility that’s located underground.

However, they get ambushed first. Due to this intense skirmish between the two parties, a series of sinkholes start opening up in the desert they’re in, dropping everyone right into a buried Sumerian temple.

As expected from a horror title by Supermassive Games, the characters won’t be alone in the ruins of this temple. A variety of “ancient and unearthly creatures” get roused from their slumber, and they will hunt you down as they try to find a way to escape from the underground world.

Based on what Bandai Namco has revealed, House of Ashes truly feels like a Supermassive Games title, as the developer has had a long history of creating spine-chilling narratives since the launch of 2015’s Until Dawn.

That being said, it doesn’t seem like House of Ashes will be any different, as “horrific discoveries and impossible decisions face the survivors” in this upcoming installment. As the player, you have to find a way to get out of the newfound underworld alive all while fighting off the savage creatures hunting you.

As for the second entry, Little Hope, the game garnered mixed reviews from the gaming community. Although many claim that it’s better than Man of Medan, which was also criticized by many, other players didn’t like the linear storyline, and how the characters weren’t interesting enough. Besides that, critics thought that the moral decisions just didn’t make enough of an impact.

Nevertheless, these constructive criticisms didn’t stop other players from enjoying the game. As such, we’re sure that House of Ashes will still have a decent following once it gets released next year.