Minecraft Dungeons, which debuted last year, offered a somewhat different experience than the original open-world sandbox, focusing on top-down gameplay and dungeon crawling. The game will get its next DLC later this month, with Mojang reporting that Hidden Depths will be available beginning May 26 on its website.

The expansion will transport Dungeons and Dragons players to a brand-new Ocean biome, where they will be tasked with battling new mobs and finding new areas while trying to stop a “spreading injustice.” It will be the game’s fifth expansion, and it will be released on the game’s first anniversary, one year after its release. 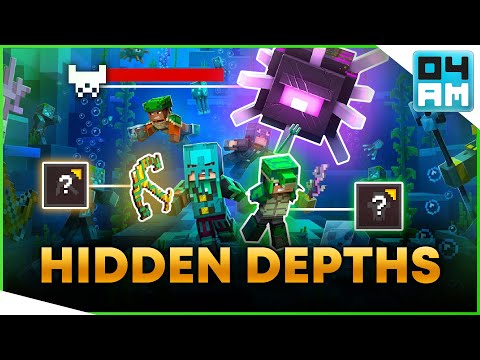 On the same day as the DLC, Mojang will announce a free update for Minecraft Dungeons, which will include a number of new features. The most significant of them is the introduction of a new villain known as the Raid Captain, who will appear in the world of Minecraft Dungeons and have difficult encounters.

The strong mobs seem to present a challenge to seasoned players while still promising rewards if defeated. Mojang also says that the free update would bring a slew of new enchantments and quests to the game, guaranteeing that even those who don’t want to play Hidden Depths will have new content to enjoy.

Flames of the Nether, Howling Peaks, and Creeping Winter are only a few of the Minecraft Dungeons expansions that have been released in the last 12 months. Each one introduces a new biome, complete with new missions, weapons, and mobs to beat.

The base game has a two-part Caves and Cliffs upgrade over the remainder of 2021, but Minecraft Dungeons isn’t the only Minecraft project getting a major expansion. Several new features will be added to Minecraft, including new caves, bricks, and improved height and depth limits.

It appears to be a sizable chunk of content that will drastically alter the spelunking and mountaineering encounters in the game. Minecraft will also have an archaeology update, but it has been postponed until next year so Mojang can focus on it further.

The Best Class Synergies In League of Legends Teamfight Tactics