The Arch-Tempered variant of Zorah Magdaros is now playable in Monster Hunter World on consoles. Everything you have to do is go to the bulletin board’s event quests tab and jump right in.

ArchTempered Zorah Magdaros isn’t all that far from standard Zorah Magdaros (the second fight specifically). However, when you don’t have much time to defeat the beast, any bit of damage counts.

Here’s how to defeat the Arch Tempered Zorah Magdaros:

How To Kill The Monster

Zorah Magdaros is vulnerable to weapons that have a water or dragon feature. Leave your arms that cause status effects in the trunk; they have little effect on Zorah Magdaros. Armor or decorations with the Heavy Artillery ability will increase the strength of the cannon and ballistae shooting, which will be extremely useful in the fight’s second phase.

As soon as you arrive at the mission, go to a hitching post and climb on Zorah Magdaros’ back. The first thing you would do is kill the three Magma Cores on its back. They’re all in the same spot they’ve always been, so use the mini-map as a guide.

The magma that the cores emit is much more intense, so you must return as soon as they begin to glow. A tool like a hammer or long sword is good because it deals a lot of damage while also helping you move about. Zorah Magdaros can change form from time to time, but this isn’t a major issue.

Nergigante will eventually appear on the wide, arena-like region in the back of Zorah Magdaros. Nergigante isn’t a big deal; what you have to do is repel it by doing enough harm to it. It’s not even regular-tempered, let alone Arch-Tempered. 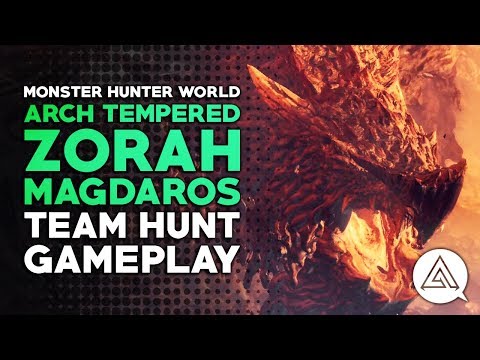 You can’t just forget it as you can when battling normal Zorah Magdaros, so repel it as soon as possible. Place bomb barrels in the arena so that Nergigante collides with them as soon as it lands. As a note, ore deposits can be found all over Zorah Magdaros, so stop by and mine them when you have the opportunity.

You’ll eventually hit a brick wall. You must use cannons and ballistae ammunition to weaken Zorah Magdaros and complete the task. Concentrate the efforts on the cannons, which deal much more harm than the ballistae.

Suppose you run out of ammunition for a nearby cannon, attempt to locate a new ammo pile close by. Zorah Magdaros will charge the wall now and then, but it doesn’t do much harm. It does, however, smash cannons and ballistae.

The charge assault of Zorah Magdaros is destructive, however, you can stop it. When it’s charging a threat, the Handler will warn you. When that happens, use a ballista to fire binder ammunition and cannons to disrupt the assault and temporarily stun Zorah Magdaros.

You will get on the ship’s deck by hopping down from the left side of the wall. Not only does the ship have more cannons, but it still has the Dragonator’s turn. The Dragonator is necessary for defeating Zorah Magdaros because it deals huge damage to it. However, according to US Gamer, it just fires every five minutes, so make sure the beast is right beside the ship before firing.

NPCs will be present to load cannons, allowing you to run around and shoot them until they’ve been fully armed. When the NPC waves to you, you know they’re completely loaded. If you do all of that, you should have no trouble defeating Arch Tempered Zorah Magdaros.

According to IGN, you can get the Critical Status ability by wearing at least three gammas Zorah Magdaros armor pieces, which improves status impact damage when causing critical hits. Status factor builds have been much more feasible with the launch of gamma Zorah Magdaros armor, as you now have a lot more protection and decoration slots to deal with, making you more effective against tempered monsters.

The gamma armor collection is broken down as follows:

You will also get the Origins Layered Armor by completing a distribution quest with the special materials from Arch Tempered Zorah Magdaros.

Cyberpunk 2077 Players Can Turn Off Nudity