Far Cry 6’s revolution, it turns out, is being led by an unexpected character in the game’s most recent cinematic trailer: a humble chicken. In Ubisoft’s upcoming open-world FPS, players are put in the role of Dani Rojas, a guerrilla fighter tasked with overthrowing the corrupt President Antón Castillo (portrayed by Breaking Bad and The Mandalorian villain Giancarlo Esposito) in the fictional Caribbean Island of Yara.

Rojas will need allies to accomplish this, and Far Cry 6 has plenty of them – both human and non-human – to help him in his mission to free Yara. One of the most noteworthy of these allies is Chorizo, an adorable paraplegic Dachshund that won fans over the instant he was first revealed in Far Cry 6’s first gameplay trailer back in May.

Far Cry 6 will enable Rojas to touch, feed, and interact with a number of different species during the game’s duration – and it appears that the animals will return the player’s generosity by leading violent revenge against their foes.

On its official YouTube page, Ubisoft published a new cinematic video for Far Cry 6 earlier today. This humorous, pre-rendered short, titled “Chicharrón Run,” is about a chicken who is kidnapped and put into a combat ring by Antón Castillo’s soldiers. However, the bird quickly flees, leading an armed guard on a chase through Yara’s dusty streets, finally passing Dani Rojas’ rebel troops. As the guerillas attack Castillo’s troops, a raging revolt breaks out in the streets, with the chicken from earlier looking on proudly.

Aside from recruiting the local fauna to overthrow an oppressive dictator, Far Cry 6 players will navigate the massive tropical island of Yara in search of needed resources, as there will be a much greater emphasis on exploration than past Far Cry games. 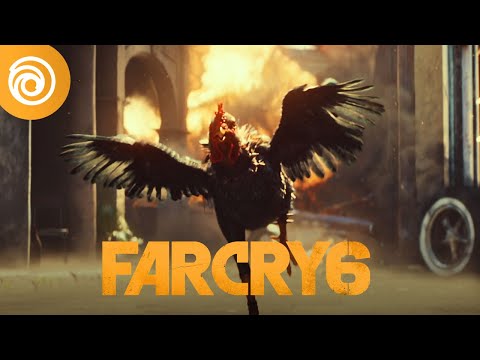 Players will also see the battle between Rojas and Castillo through the eyes of Castillo’s young son Diego, who is being groomed by his father to carry on as Yara’s ruler one day. Even after Far Cry 6 is released on October 7, Ubisoft wants to add more DLC content to the game, including visits from former Far Cry antagonists such as Vaas, Pagan, and Joseph.

Far Cry 6’s apparent tale of dictatorship and dark family legacy doesn’t look like it’s going to be a laughing matter, but seeing a measly chicken escape from the grasp of Antón Castillo’s forces and inadvertently spark a fierce rebellion is certainly funny. When Far Cry 6 debuts next week, players will be able to enlist chickens, dogs, and other animals to their cause, showing that even the most ruthless dictatorship is no match for an angry, flightless fowl.