Marvel’s Guardians of the Galaxy is an upcoming video game starring Marvel’s famed cosmic misfits. For this fresh representation of the Guardians and the obstacles they encounter, the developer Eidos-Montréal is drawing influence from Marvel movies as well as comic books.

Previous trailers for Marvel’s Guardians of the Galaxy gave fans a peek of the game’s intergalactic environment, characters, and key protagonists. Players will assume the character of Star-Lord, Peter Quill, in the game, and will be able to lead the Guardians on another cosmic journey via him. However, the most recent teaser revealed even more of the game’s enemies.

The game’s Universal Church of Truth was featured in the latest video, which debuted at the PlayStation Showcase 2021. The Church is introduced in the latest teaser as a key adversary with whom the Guardians will encounter and fight in the game at some point. Unlike earlier trailers, which focused on Lady Hellbender, this one emphasizes the Church and its followers as a more powerful force in the game.

Grand Unifier Raker, a member of the Church, was seen in a previous Guardians of the Galaxy cinematic, and the latest video shows a bit more of the organization he heads. This includes the Church’s spacecraft and members, as well as clues to a larger purpose for the galaxy including “The Promise.” A purpose that irritates the Guardians, as the trailer foreshadows a huge clash between the squad and the Universal Church of Truth, who will enlist the help of the Nova Corps. 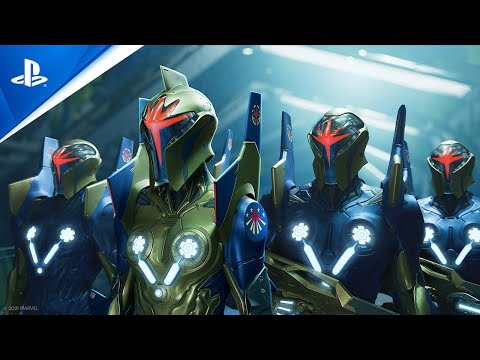 The Universal Church of Truth is based on a Marvel comic book character of the same name. The Universal Church of Truth is an interplanetary religious empire led by the super villain known as the Magus in comic books. He is the evil counterpart to Marvel’s cosmic hero Adam Warlock, who was hinted at in a post-credit scene in Guardians of the Galaxy Vol. 2’s post-credit sequence.

Grand Unifier Raker and the entity known as “The Matriarch” appear to be significant members of the Universal Church of Truth in the game, according to the video. Both are members of the Church from the comic books. Raker and the Universal Church of Truth will be key antagonists for the Guardians, according to the teaser. It also displays a few scenes from what looks to be Raker’s boss fight in the game.