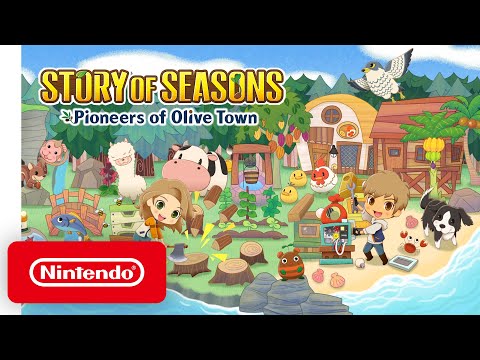 Nintendo has once again announced a surprise Direct Mini, which contained details regarding Nintendo Switch’s highly-anticipated titles. One of the games included in the presentation is Story of Seasons: Pioneers of Olive Town.

Along with its own trailer, the upcoming farming game is scheduled to be launched on February 25, 2021 in Japan, while players from North America and Europe will be able to experience the game on March 23.

Thanks to the latest Nintendo Direct Mini, we were able to catch a quick glimpse of Story of Seasons: Pioneers of Olive Town, which gave us a pretty good idea about what to expect once the game goes live.

From what we can see, the farming simulator looks adorable and has the potential to compete against highly-acclaimed titles such as Stardew Valley and Animal Crossing: New Horizons.

Similar to the past Story of Seasons installments, Pioneers of Olive Town will still have you taking on the role of a farmer. Your responsibilities include taking care of your livestock, planting and watering crops, and befriending the townspeople.

We’re not quite sure what the storyline of Pioneers of Olive Town is exactly, but basing on just the trailer, you can expect the usual Story of Seasons gameplay that many know and love.

That being said, there are other things you can do asides from tending to your farm. For one thing, you can work on developing Olive Town’s infrastructure, participate in more than 200 different events in-game, commission all kinds of accessories, and even create your very own outfits.

If you look at the game’s designated page on the Nintendo Switch eShop, you’ll see that Story of Seasons: Pioneers of Olive Town will have two game modes, namely Seedling and Normal Mode.

Seedling Mode is perfect for those first-timers who need a little assistance settling into their new farm life. On the other hand, the latter is for the long-time fans of Story of Seasons, those who already know what they’re doing and what they’re going to do.

Judging by the trailer and the screenshots we’ve seen of the game, Pioneers of Olive Town will be implementing the same chibi-like art style from Friends of Mineral Town, which is one of the things we adore about this franchise.

Asides from revealing details on Story of Seasons: Pioneers of Olive Town, this month’s Nintendo Direct Mini also featured other games such as Hyrule Warriors: Age of Calamity. As a matter of fact, the presentation revealed that a free demo is currently available on the Nintendo Switch eShop.

Control: Ultimate Edition was also announced for the Nintendo Switch via cloud streaming, which is how Resident Evil 7 was previously launched in Japan for the Switch. Among other announcements, the Direct Mini also revealed the highly-awaited release date of Bravely Default 2, which will be next year in February 2021.

LEGO May Release Sets for Animal Crossing and Fall Guys