Despite being out for 11 years, Mojang’s Minecraft is still one of the most popular video games available in the market right now, continuing its rise in popularity as time goes on. As a matter of fact, Minecraft hit a milestone of 600 million active players only yesterday, 400 million of which are from China alone.

Being a game that cultivates one’s creative juices along with the fact that it has such a massive playerbase, it doesn’t come as a surprise that the Minecraft community is home to some incredible fan-made content and projects.

For instance, one dedicated gamer recreated The Legend of Zelda: Ocarina of Time in its entirety — from boss fights, items, locations, and more. Fan recreations aren’t a rare thing to happen in Minecraft, in fact, it’s one of the most popular projects for fans of the game.

Most often than not, fan builds primarily focus on recreating iconic and highly-popular locations, or perhaps specific set-pieces featured in other video game titles. For example, the summer of this year saw the recreation of Warzone’s Gulag in Minecraft thanks to the hard work of one player.

However, it appears that YouTuber Rivero may have created one of the most impressive recreations in Minecraft history. 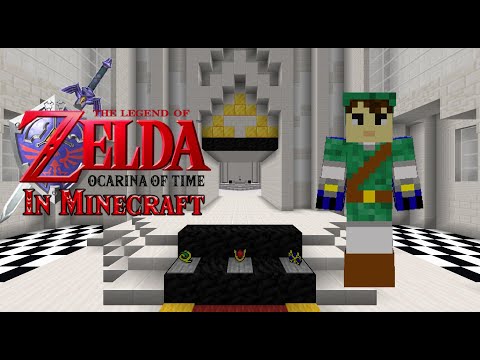 This plan of Rivero’s to recreate The Legend of Zelda: Ocarina of Time on Minecraft started in 2013. According to an interview Rivero had with PCGamesN, he started this project on the Xbox 360 in 2013, but he decided to abandon this concept three years later and started from scratch on Minecraft’s PC version instead.

Seven years have passed since Rivero started, and now his Ocarina of Time build is finally complete. He has successfully recreated the entirety of the classic video game inside the blocky world of Minecraft, and fans have the option to download it for free. For those interested, the download link can be found in the description section of the trailer published on YouTube.

By downloading Rivero’s world build, Legend of Zelda fans will be able to re-experience Ocarina of Time in a completely different way. Players will be able to traverse the land of Hyrule with Minecraft’s aesthetics — from Kokiri Forest all the way to Ganondorf’s final boss fight.

What makes Rivero even more worthy of praise is the fact that he created the world build using Vanilla Minecraft, which means that he didn’t utilize any kind of mod to help him craft or mold the world. He only made use of the already-existing command blocks present in the game. There’s also a full timeline on Rivero’s Discord showcasing his progress throughout these years.

Without a doubt, Rivero’s Minecraft recreation of the highly-beloved The Legend of Zelda: Ocarina of Time is incredible and definitely one of the best world builds out there. Coincidentally, this recreation blends together two companies that have been working together recently.

Recently, Nintendo announced that Super Smash Bros. Ultimate’s DLC fighter is Steve from Minecraft. On the other hand, Xbox and Nintendo both worked with Minecraft in the past as well. We hope that Rivero’s amazing project will inspire others to create their own incredible Nintendo-themed world builds, too.

Alba: A Wildlife Adventure Gets December 11 Release Date for PC and Apple Arcade